Proudly hosting the best horses and riders in the country

Other Large Events at Aintree

ENTRIES AND STABLING WILL OPEN ON WEDNESDAY 16TH SEPTEMBER AT 12.30PM

GET READY, GET QUALIFIED

Following our previous announcement in respect of a new indoor Championship Show which will be hosting some of this year’s National Championships, we are now pleased to be able to share the news that the show has been awarded to Aintree Equestrian Centre.

Scheduled to run between 7 – 11 October 2020, the show will host the Junior and Senior British Novice and Discovery Finals that were due to take place at the National Championships this summer in addition to the National Finals that would have taken place at Horse of the Year Show and the B & C Championships due to have been held at the Royal International Horse Show.

Iain Graham, Chief Executive of British Showjumping commented “In awarding the Championship Show to Aintree Equestrian Centre we trust that our members will be pleased at the prospect of attending a show within an environment that is synonymous with top class equestrian sport.  The team at Aintree are fully committed to ensure they deliver a showcase for the sport whilst also giving members and their horses access to their superb facilities that they have on site.  We have full confidence in the team at Aintree and look forward to working with them on delivering this unique show”.

The Aintree International Equestrian Centre was designed specifically to provide a venue for Equestrianism, and is now a showpiece in itself and the heartbeat of Equestrianism in the North West of England. It hosts numerous events each year alongside the racecourse including the Randox Health Grand National and the annual six day British Showjumping Dodson & Horrell National Amateur & Veteran Championships in November

Carly Sage, Aintree Equestrian Centre General Manager, said “We’re delighted and proud to be awarded to host the new indoor Championship Show at Aintree. It’s been a difficult time for everyone so we’re pleased to be able to see these wonderful horses compete in the Centre again. We’d like to thank the team at British Showjumping and we’ll be working closely with them to ensure all the appropriate Covid-19 protocols are in place and we deliver a safe and very successful Championships in October.

Further information regarding the show and the schedule will be issued on the British Showjumping website as it becomes available.  For those hoping to qualify for each of their respect Championships please be aware that there is a relaxation on the number of double clears required to qualify for the second rounds and this, along with the qualifying shows and classes, can be found here . 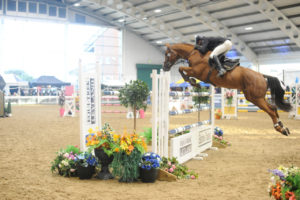 Entries and stable bookings will open on Monday 7th September at midday, please click the links below to view the full schedule and to enter (all bookings are online only):

COMPETITORS MUST HAVE JUMPED IN A 1.35M OR 1.40M CLASS AT THE WINTER CLASSIC TO QUALIFY FOR THE GRAND PRIX

VACCINATION POLICY
As per our terms and conditions, all horses attending Aintree EC must be up to date with their annual vaccinations, and be 6 days clear of having had any vaccination. Checking of passports will continue at all forthcoming events. Please provide passports for inspection as you arrive.

COVID-19 REGULATIONS/INFORMATION
Clients must NOT attend Aintree if they:
• Have been instructed to self-isolate by NHS111 or NHS Track & Trace
• Are in a household that is self-isolating
• Have shown any of the following symptoms in the last 14 days:
o A new continuous cough
o An elevated temperature/fever above 37.8c
o A loss of smell or taste
• Have come into contact with anyone with a confirmed case of Covid-19 without wearing appropriate medical-grade PPE.

The rules and regulations are constantly under review and are subject to change at short notice. We will be imposing socially distancing rules as well as adhering to the rules of British Showjumping. Due to the changing nature of the situation a detailed email will be sent to every competitor prior to the event with important information. Please look out for this email and take the time to read it.

Should you have any specific questions in relation to the event please email us at info@aintreeequestriancentre.co.uk

We look forward to a great 5 days of top class showjumping!

Please note a change to arrival arrangements – no arrivals are allowed prior to Sunday 8th November 2020 due to us racing on Saturday 7th November 2020. We appreciate your cooperation.

Just a quick update about the A and V Champs.

The schedule will more or less stay the same as last year, it worked well and we don’t feel we need to change anything for the time being. So for those of you asking, the Monday will be the warm up classes (these were on the Tuesday which was the first day last year) and the Tuesday to Saturday will be the championship classes.

It is looking likely that we will be investing in an additional outdoor pre warm up area by the arena, this will then enable us to carry on jumping the 30/35 an hour. More details on this will be available nearer the show.

As you know we are heading into a busy time with the HOYS finals, followed by our Winter Classic the week after, so we will not be opening entries or releasing the full schedule until these shows are finished, then we can fully concentrate on our favourite show of the year!

This will not be available for some time but we will release the schedule classes as soon as we can. This does take quite some time, so please bare with us. We will announce on here when this is available, which will be before we open up the entries.

There will be plenty of classes for everyone. So if you are trying to book off time at work, we advise competitors to book the whole week. It is a Championships so we try and have something for everyone (as long as you have qualified for the show).

This will be done via Horse Monkey, please ensure that you are registered with them or if you have registered before, check you can log in ok. This is now the ONLY way we will accept entries and stables bookings for this show.

We are a very busy venue and we have a lot of other events on before the champs, so please try and be patient…. we know how excited you all are!

Thank you and further updates will be available later in the year – in the meantime good luck in qualifying and we look forward to seeing you all at Aintree.

Would you like to be one of our sponsors?
More Shows